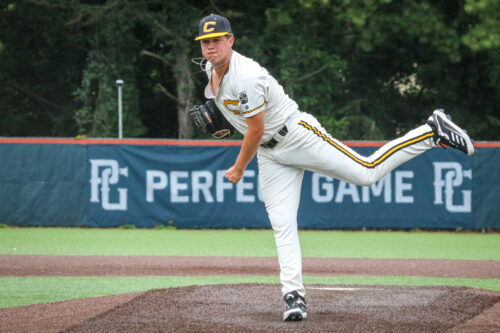 The weather is warming, summertime is just around the corner and that means it’s almost time for Canes Baseball.

Canes National 17U will once again feature some of the top players in the country from coast to coast. From the sunny shores of Miami to the beautiful Pacific Coast of California, the Canes will put a highly-competitive and highly-skilled roster of players on the diamond for three tournaments this summer.

As we count down the weeks to the start of the summer, which will begin in North Carolina at the USA Baseball Complex on June 13, let’s get to know the 17 pitchers who will be on the roster.

One of several first-year pitchers with the Canes is right-hander Dylan Lonergan (Duluth, Ga./Brookwood HS), who is a two-sport athlete. A football and baseball recruit, Lonergan will take some college visits this summer to help decide on his future home. He’ll also play a big role on the mound for us.

“I joined the Canes because they are the most elite travel ball program in the country. I felt like it would help me develop a lot as a player and also surround myself with other great players and coaches,” Lonergan said. “I’m most excited about playing this a couple tournaments and venues that I have never been a part of. I’m also excited to meet and play with a bunch of other great baseball players that raise my level of play. It’ll be very new for me since I’ve played with a somewhat local team the past few years.”

A high school teammate of former Canes pitcher Jackson Ferris, right-hander Jaewoo Cho (Bradenton, Fla./IMG Academy) took some advice on where to play his summer ball. A commitment to Arkansas, Cho wants to continue to develop on the mound under pitching coach Jason Mills.

“I wanted to play for the Canes after hearing really good things about it from Jackson Ferris, and really want to play with talented kids so I can learn from my teammates,” Cho said. “I also want to get more velo, which is one of my biggest weaknesses, and win every tournament we play to make the most memorable summer.”

Also playing for the Canes for his first time, left-hander Tore Indomencio (Chicago, Ill./St Ignatius HS) is ready to get together with his future teammates. The Notre Dame commitment chose to play for the Canes to have a great chance at winning big tournaments.

Left-handed pitcher Frank Menendez (Miami, Fla./Doral Academy Charter) is joining Canes Baseball for his first year this summer. We’ll acknowledge him by playing a doubleheader in his hometown on June 19. The Florida Gators commitment is certainly excited to be a part of the organization.

“What I’m most looking forward to is spending time with this group of teammates who are all at the same level and just getting to hang out with them and ask questions will make me a better player,” Menendez said. “What made me want to join Canes Baseball was I wanted to play the best competition in the best environment and everyone knows there’s no better team to do that with then with the Canes.”

Right-handed pitcher Jonah Conradt (Greenville, Wisc./P27 Academy) played with the Canes in the fall, but is here for his first summer this year. A commitment to the Arkansas Razorbacks, Conradt was a part of the of the roster for the WWBA underclass championship last year in Fort Myers, Fla.

“My most memorable moment was definitely winning WWBA underclass in the fall in Fort Myers. We won nine straight games and got to play at Jet Blue for the championship, awesome experience,” Conradt said. “I knew that Canes was the best travel program in the country and when I was asked to play with them in the fall, I couldn’t turn it down. I’m most looking forward to just being with the guys again and playing the game we love, great group of guys, I miss them and I’m ready to get the summer rolling!”

One of several west coast arms who will pull on a Canes jersey this summer is right-hander Cal Randall (Discovery Bay, Calif./De La Salle HS). The power arm, committed to UCLA, featured for us last year, and is back again this year to win more championships.

“My most memorable moment with the Canes is when we dog piled after winning the PG World Series. This was my favorite moment by far because I realized that this is a group of studs that I love,” Randall said. “I’m excited for my first start. I’m going to come out and dominate and I’m excited to do that with these guys. This team has helped me realized that there’s so many different kids out there that come from different backgrounds but have crazy intensity on the field.”

One of our long-time arms is left-hander Mason Yokum (Leesburg, Va./Pro5 Academy), who is back for his fourth season with the Canes. A commitment to the University of North Carolina, Yokum is ready to reignite the bonds that have been formed over the years, and create new ones.

“My most memorable moment with the Canes was the WWBA in Florida. Our team had a lot of fun hanging out at the hotel pool and playing hard to win the championship,” Yokum said. “I am looking forward to getting back together with my team again. We are from all over the country and don’t get to see each other during the school year. We are like brothers. I couldn’t ask for better teammates.”

Another Sunshine State native committed to the Florida Gators ready to take the mound for the Canes is right-hander Christian Rodriguez (Coral Springs, Fla./Stoneman Douglas HS). Rodriguez and the Canes will play in tournaments at USA Baseball, in West Palm Beach, Fla. and in the WWBA Championships in Georgia.

“I’m excited to play in these big events and going out there and winning,” Rodriguez said. “The big thing that made me want to join is the history and the reputation that the Canes organization carries.”

Ready to take the mound for the Canes is left-hander Ryan Rushing (Bradenton, Fla./IMG Academy). Teammates with Cho in high school, Rushing is committed to play his college baseball at Indiana University.

“Canes is a well-known and run organization. Experienced coaches. Play with and against the best players,” Rushing said. “I am looking forward to a fun and competitive summer. Create more friendships and memories. Get more exposure playing baseball.”

Another left-hander who is back with the Canes this summer is Jacob Gomberg (Coral Springs, Fla./Stoneman Douglas HS). He’s teammates with Rodriguez during the school year, in the summers with the Canes, and in the future with the Florida Gators.

“My most memorable moment playing with the Canes is winning the WWBA underclass this past fall. The feeling of all the players working hard for one goal and just focusing on the task at hand shows that anything you put your mind to is achievable,” Gomberg said. “I have only played for the Canes for the fall but they have shown me the ins and outs of how playing baseball on a top program in the country is like. They are so professional on how they go about business and it is an attraction coming from a player who is looking for the best opportunity to succeed.”

Right-handed pitcher George Zaharias (Menlo Park, Calif./Menlo-Atherton HS) joins the Canes for his first summer. The only University of Texas commitment on the roster this summer, Zaharias became a Cane to compete for championships.

“I’m most looking forward to is winning and having fun with my teammates,” Zaharias said. “What made me want to join Canes was playing at the highest level and getting the most exposure possible.”

After pitching for us some in the fall, right-handed pitcher Duke McCarron (Ventnor, N.J./Ocean City HS) joins for his first summer with the Canes. The University of Maryland commitment is ready to play on the fields of the USA Baseball Complex in Cary, N.C.

“I got to start playing with the Canes this past fall for a few tournaments. Jupiter was a blast but the Underclass World Series that we won was the best part of the year. Has an amazing time with amazing coaches, players and an awesome team,” McCarron said. “I am most excited and looking forward to our tournament in Cary. It’s a great complex and going to be an awesome time along with being able to see my teammates. No better way to start a summer.”

One of the backbones of the pitching staff last summer was left-hander Tucker Holland (Burlington, N.C./The Burlington School). A commitment to the University of Arkansas, Holland saw action with the 17U team last fall in the PG World Championships in Jupiter, Fla.

“I’m looking forward to getting back out there with the guys. What we did last year was awesome and we built a great bond so I’m excited to see my brothers again for one last summer,” Holland said. “As far as tournaments go, I’m excited for UBC this year because it really is the most talented players in the country all coming together and going at it for a few days. The best thing about UBC is that you can lose at any time and I think we knew we had to play our best ball the entire week last year and that’s what we did.”

Getting his first summer action in a Canes uniform is right-handed pitcher Steven Echavarria (Millburn, N.J./Millburn HS). A commitment to the University of Oregon, his first exposure to the organization came through our social media pages.

“I am excited to be playing at a more competitive level and facing some of the top hitters. I am looking forward to getting the experience of traveling with the team,” Echavarria said. “Canes Baseball is one of the top nationally known club baseball teams and it is an honor to be playing for them. I have followed them for the past few years on social media and always enjoy seeing what they are doing and where they are playing.”

Right-handed pitcher Matt Augustin (Cherry Hill, N.J./Bishop Eustace Prep) is eager to put on the Canes uniform this summer. A commitment to the Virginia Cavaliers, Augustin has a goal of winning tournaments.

“I am looking forward to playing in the best tournaments and having the best experience with it,” Augustin said. “I want to be able to be around the best and participate and help the team each time I go out there. I want to be extremely competitive and play at the best events.”

Right-handed pitcher Reese Marcum (Lexington, S.C./Lexington HS) is back for another season with the Canes. The Palmetto State native will stay home and play his college baseball for the South Carolina Gamecocks.

“My most memorable moment with the Canes so far was when we won the PG World Series. I enjoyed that because I was able to help out our team and we had a chance to show everyone that we are the best team in the country,” Marcum said. “This summer I’m looking forward to a lot. Being able to compete with the best competition in the country and being able to play with some of my best friends. Over the years I have formed a lot of big and meaningful relationships with both coaches and teammates.”

Also on the Canes’ roster to see action on the mound this summer is right-handed pitcher Dylan Questad.

Canes 12u NC – Naylor finished its season with a Championship in Hartsville, SC