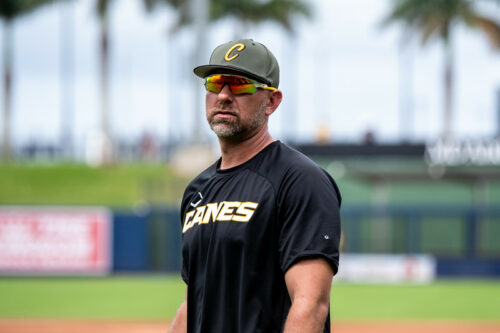 Canes Baseball president and CEO Jeff Petty is launching a new venture and is partnering with the best in the space to do so. Petty is joining forces with PRO5 Academy to create a Virginia-based team to complement the original powerhouse program based out of Raleigh, N.C.

PRO5 VA will be based out of Fredericksburg, Va. with the $35 million FredNats Ballpark, home of the Low-A Washington Nationals affiliate, serving as home field. Petty and his staff will provide professional baseball instruction along with high-level strength and speed training to prepare high school-aged players for the next steps in their baseball career.

A partnership between Petty and PRO5 Academy makes perfect sense for both sides. The outstanding standard upheld by Petty and the Canes as well as Mike Griffin and PRO5 Academy is a match that will lead to team success along with individual growth for players who put in the work, both from an athletic and academic standpoint.

“We are extremely excited to partner with Jeff and his staff to create PRO5 VA,” Griffin said. “Our aim is to help players prepare for success on and off the field at the next level whether in college or professional baseball through focusing on five Areas of Development that include Leadership and Player Development. Jeff and his staff share the same purpose and goals to influence young elite athletes which makes this a great fit.”

In addition to the advanced competition that is played in the fall and spring seasons against Division II schools, junior colleges and other academies in the southeast, the academic component is imperative as well. With focus on player and leadership development being of paramount importance at PRO5 Academy, the staff and academic advisors provide guidance and supervision to be sure that athletes reach their potential on the field and in the classroom.

Both the Canes and PRO5 Academy are accustomed to great on-field successes. PRO5 Academy won the first ever National Academies Association regular season and conference tournament championships and has built a roster with 18 college commitments for this season. Petty, who started Canes Baseball in 2005, has 28 national championships and has over 2,750 college commitments. The Canes have produced over 275 MLB Draft picks with 35 players making it to Major League Baseball.

“I am thoroughly impressed with Mike Griffin, Jay Stott and Drew Anderson and how they run things at PRO5 on and off the field. They are truly developing players and men,” Petty said. “That’s what we are about at PRO5 VA, too. We want to develop players and men throughout the year at the academy level and be sure they have quality instruction on the field, but also in the classroom. This is about PRO5 and academy baseball, and has nothing to do with what travel baseball team a player is with in the summer. This is about player development regardless of travel team affiliation.”

There is already great overlap between the North Carolina-based PRO5 Academy and the Canes. Players like Ryan Clifford, Eli Serrano, Mason Yokum, Reid Haire and Gavin Gallaher play for PRO5 during the academic calendar and then for the Canes in the summer. Those players are committed to the likes of Vanderbilt, North Carolina, N.C. State and Georgia Tech.

Recruiting for PRO5 VA has already started as we look to attract dedicated, elite baseball players from across the state and the country. We aim to prepare our players to have success on and off the field, whether it’s in college or professional baseball. PRO5 VA will provide unrivaled instruction and an environment conducive for success by training in top-of-the-line facilities on a daily basis.

PRO5 VA has assembled a great staff with Anthony Burke, who was pitching coach and recruiting coordinator at powerhouse program Chipola JC, as head coach. Former Triple-A pitcher with the Baltimore Orioles, Cody Wheeler, serves as associate head coach and pitching coach. Jarrett Mustain will serve as assistant coach as well as academic advisor. Virginia high school baseball legends Gregg Conner and Tim Lowery, who have more than 700 high school wins between them, are also going to be on staff. Pastor John Gordon Corrigan will serve as leadership director on staff.