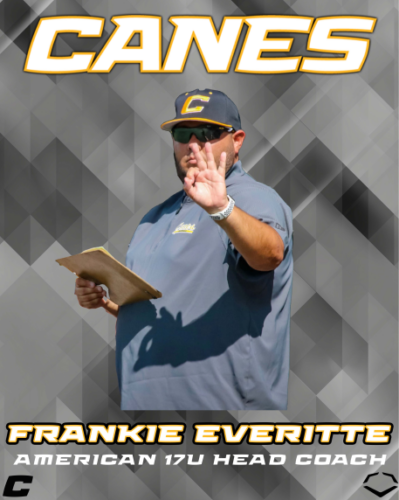 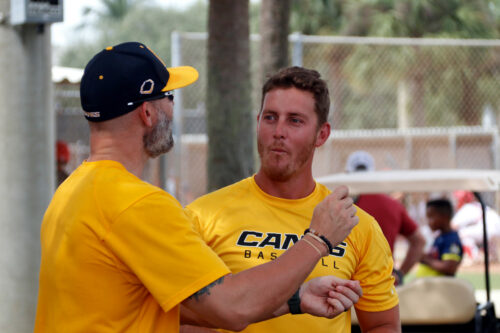 Canes American 17U has a new leader this summer as Frankie Everitte takes over the championship-level program. Everitte, who has served as an assistant coach for the team each of the last two seasons, was a part of the coaching staff that led our American squad to the 2020 WWBA 17U Championship.

Everitte takes over for former head coach Tom Willoughby, who stepped down in February after 15 years with Canes Baseball in various roles.

A former assistant coach and recruiting coordinator at both the Division I and junior college level, Everitte brings a tremendous amount of experience and knowledge to Canes American. A graduate of Coastal Carolina University, Everitte was named the National Volunteer Assistant of the Year in 2015 while at East Carolina University.

Prior to his time at ECU, Everitte spent three years at nationally-ranked Division II Brunswick CC and then two seasons at Campbell University. He also was an assistant coach and recruiting coordinator for two seasons at USC Sumter after his time with the ECU Pirates.

Everitte joined Canes Baseball in May 2016 and has coached with various teams and age groups during his time. He teamed up with Willoughby and the 17U American team in 2020 and immediately helped them to one of the most memorable weeks in Canes history, winning the most coveted championship in summer travel baseball.

Filling out the staff are two assistant coaches who remain with Canes American as well as one new face.

Mike Petty, who has coached for 16 years with the Canes in various roles, is the associate head coach this year. Petty, who became an assistant with the American 17U team in 2020, served as the 16U National Team head coach for three years and won four national championships, including WWBA World Championship in Jupiter, Fla. as an underclass team in 2017.

Former Canes player Seth Maness, who has coached the last two seasons with our organization, remains as an assistant coach with the American team. A former 11th round pick in the 2011 MLB Draft, Maness spent five years in the majors – four with the St. Louis Cardinals and one with the Kansas City Royals. Maness, who also currently works with the UNC Wilmington baseball team, has experience at the highest level and will share that wisdom in the American 17U dugout.

Rounding out the Canes American 17U staff is Jack Britt (N.C.) High School head coach Steve Clabaugh, who has been with the school since the 2019 season.

Canes American 17U will play four tournaments this summer, beginning on June 9 at LakePoint Sports Complex in the PBR National Program Invitational.